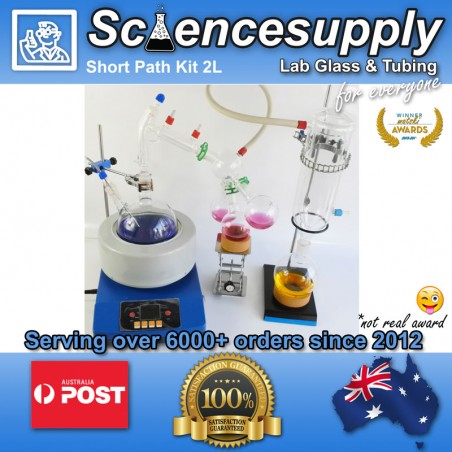 Compact Distillation Units for Commercial Use

We give every care to safe packaging, but should any item not arrive intact we will happily replace.

Compact Distillation Units for Commercial Use

Can purify oils extracted from plants, for use in medicine and fragrance production

It is possible to extract oils from plants in a number of ways, often using alcohol, solvents, or supercritical CO2. After extracting a crude oil from the target plant, the oil is purified by distillation and can be extracted individually to yield clear and clean distillates that are 99% pure and this is done by controlling the pressure and temperature of distillation in a process known as short-path distillation.

Short-path distillation is specifically suitable to plant oils because it avoids thermal decomposition of the volatile compounds. Precise distillation is critical for many production purposes

In short-path distillation, the crude extract is heated in a flask with reduced pressure. The heat is slowly increased, and the crude oil constituent molecules boil at their specific boiling points in order to form vapors. The vapors ascend a short distance into a vertical condenser, where water cools them and the compounds collected separately according to weight.

Flasks over 500ml require an EUD if you live in QLD

VIC, WA, NSW require ID only to be emailed after purchase.